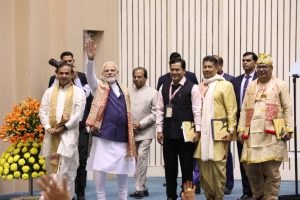 Vigyan Bhawan in New Delhi was indeed crowded with audience including a large number of distinguished personalities from Assam as Prime Minister Narendra Modi on 25 November addressed the closing ceremony of the year-long celebration of 400th birth anniversary of 17th century Ahom army general Lachit Barphukan. Terming the extraordinary Ahom army general as the greatest patriot of his era, PM Modi stated that Vir Lachit’s policy of Nation First is exactly the motto on which the Naya Bharat is being administered. For the brave warrior motherland was his first concern and that’s why he could pronounce ‘Deshatkoi Momai Dangor Nahay’ (maternal uncle cannot be superior to the country), asserted Modi.
Congratulating Assam chief minister Himanta Biswa Sarma for successful conduct of the three-day celebration in the Indian national capital city, Modi exuded confidence this would prove decisive in ensuring Lachit saga of courage, valour and patriotism don’t remain limited to the boundaries of northeast India alone, but spread across lengths and breadths of the nation. For ages, there has been a conscious attempt from certain quarters at portraying the history of Bharat as that of defeat and surrender, stated Modi adding that attempts at celebrating the saga of unsung heroes such as Lachit are going to prove fruitful in undoing the harm the distorted history-telling has caused to the pride of the Indian citizens.

Suppressing the self-esteem of the Indians was an agenda of the colonial British regime and distortion of history was one of the means to further it, Modi pointed out adding, all must now come together to ensure history is presented in its truest sense. Modi also mentioned about legendary Assamese singer Bharat Ratna Bhupen Hazarika, who composed a number of songs praising the bravery of Lachit, and termed the Ahom general as a symbol of India’s Atmanirbhar military might.

Lachit Barphukan (24 November 1622- 25 April 1672) was born at Charaideo, the first capital of Ahom kingdom, to Momai Tamuli Barbarua (who was an army chief under Ahom king Pratap Singha) and Kunti Moran. Grown up as Lachit Deca, the warrior received formal education in military training & strategies and soon got an appointment as Soladhara Barua to the Ahom monarch. He worked as a security personal to Ahom king Jayadwvaj Singha. Later he was promoted as a top army officer and emerged as Lachit Barphukan (Barphukan was a post with judicial and executive power).

After the demise of Jayadhwaj Singha, Chakradhwaj Singha took over the charge of Ahom kingdom and appointed Lachit Barphukan as the commander-in-chief of Royal Ahom army. Presenting him a Hengdang (sacred sword), the king ordered Lachit Barphukan to lead the indigenous forces for liberating Guwahati from the occupation of Mughals. Lachit raised an army out of civilians who were mostly farmers from different ethnic communities and initiated guerilla warfare before the final assault. Chakradhwaj Singha died in 1670 and Udayaditya Singha became the king during whose tenure the Saraighat battle was won by Lachit Barphukan with valuable suggestions from minister Aton Burha Gohain.

In the naval battle of Saraighat, Lachit Barphukan crushed the huge Mughal forces, which came under the leadership of Ram Singh and Rashid Khan following the order of Mughal emperor Aurangzeb in Delhi. Even though the Ahom forces were inferior to the invading Mughals, Lachit succeeded in the battle over mighty Brahmaputra river with a perfect war strategy, a dedicated navy force and proper uses of the hill-river-valley terrain. After the extraordinary naval battle in 1671 (where the sacred moment of counter attack was calculated by Daibogya, the Royal astrologer). Mughals forces retreated from Guwahati and they could not reorganise to invade the kingdom again. Lachit died at his Kaliabor headquarters in 1672.

CM Sarma in his speech exuded confidence Lachit Barphukan would be accorded his rightful place in historical discourses in days to come, as more and more people are introduced to the velour of the great warrior. He stated that had it not been for Mahanayak Lachit, the present geo-political and cultural identity of not Assam alone but that of the entire southeast Asia would have been different from what they are today. Sarma expressed hope that the 400th birth anniversary celebration of the great mediaeval era warrior in New Delhi would be a significant step towards drawing the attention of the current generation intellectuals and historians towards Lachit

Assam Governor Jagdish Mukhi, Union minister Sarbananda Sonowal, State legislative assembly speaker Biswajit Daimary, State minister Pijush Hazarika, Rajya Sabha member Ranjan Gogoi, Parliamentarian Tapan Gogoi, State chief secretary Pawan Barthakur also attended the occasion, where a documentary and a coffee-table book on the life and glory of Lachit Barphukan (produced by State IPR department) were released. Sarma expressed his gratitude to the people of Assam for support and cooperation to the celebration, which was launched by the then President Ram Nath Kovind during his visit to Guwahati on 25 February 2022. President Kovind also laid the foundation stone for the Alaboi war memorial as a tribute to soldiers who fought against the expansionist Mughals.

Earlier on previous day, Union home minister Amit Shah attended the celebration and commented that Lachit prevented Mughal emperor Aurangzeb’s expansionist ambition towards the southeast Asian nations and thus the Ahom warrior was a central force to stop the Islamisation of a large swathe of land spanning several nations, cultural identities and ethnicities. He also lauded Vir Lachit’s skillful negotiations with various ethnic leaders to form a united front against the invaders and clever use of diplomacy against the militarily stronger Mughal forces.

The celebration in Delhi was inaugurated by Union finance minister Nirmala Sitharaman on 23 November, where she also opened two exhibitions, one on Assamese sacred and traditional houses (designed by Nuruddin Ahmed) and another with artefacts from the Ahom and pre-Ahom era starting from the reign of Kamrup king Kumar Bhaskar Varma and also some handwritten letters of Vir Lachit. A panel discussion on ‘Ahom saga of hope, skills and courage’ was organised at the same venue which participated by Lt. General Rana Pratap Kalita, former State police chief Prakash Singh along with Kapil Kapoor, Kuldeep Patowary, Chandan Kumar Sarma and Samundra Gupta Kashyap, which was moderated by former State chief secretary Jishnu Barua.
Another discussion on ‘Ignored historiography of Assam’s assertion’ was participated by Gauhati University professor Rajib Handique, author Vikram Sampath, Mangaldoi College teacher Sangeeta Gogoi, filmmaker Rajesh Kumar Singh and actor Chandraprakash Dwivedi, which was moderated by State education advisor Nani Gopal Mahanta. Deliberations included the heroic saga of Kamrupa king Prithu, who overpowered Muslim invader Bhakhtiyar Khilji in 1206, golden days of Bhaskar Varma (an illustrious king of medieval Kamarupa) and laudable effort of Assamese historian Suryya Kumar Bhuyan for picking up the inspiring story of Lachit Barphukan and common residents, who were always ready to fight for safeguarding motherland.
The tale of Bagh Hazarika was raised in the discussion, where it was profoundly declared that the Ahom history pages do not include any such warrior in association with Lachit Barphukan. History teacher Ms Gogoi firmly stated that she did not have any authentic information about the presence of Bagh Hazarika. Earlier, a noted Assamese intellectual Jogendra Nath Phukan also termed Bagh Hazarika or Ismail Siddiqui as an unauthentic character in the Assam history. Mentionable is that a section of Assamese academician-writer-journalists claimed in various forums that Lachit emerged victorious in the Saraighat battle only because of Bagh Hazarika. Even the statue of Lachit Barphukan in Guwahati accompanies a soldier looked like a Muslim.

On the first day, a cultural function at Sunder nursery was inaugurated by CM Sarma and Union law & justice minister Kiren Rijiju in presence of Union minister Rameswar Teli and State minister Bimal Bora, where various artistes showcased splendid items including a traditional prayer of Tai-Ahom community, a Sattriya dance program by Mridusmita Das Bora and her team, a medley of folk dances of Assam presented by maestro Ranjit Gogoi, an emotionally charged drama depicting the illustrious life of Vir Lachit and solo an enchanting performance by popular Assamese singer Angarag Papon Mahanta.